Celebrating the freelance maker in us all 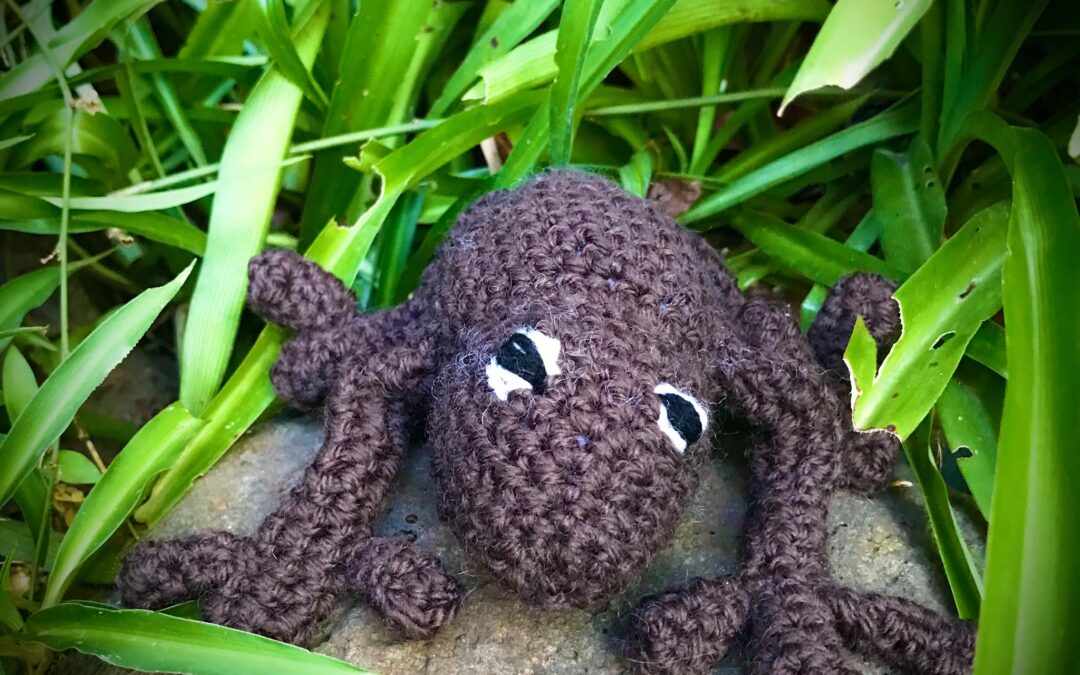 There’s a freelance maker in all of us- or so we keep seeing with every edition of the #IMT I made this thread in the Freelance Jungle. You can see that evidenced in previous editions with making up a storm and other creative endeavours.  This collection includes upcycling, working with fabrics, cooking up a storm, doing it for the kids, adding stuff to the home and more.

Let’s see what the freelance maker scene got up to in October and November 2020 via the Freelance Jungle.

Working with found art and tight budgets is the life of the freelance maker. Here are two such situations where it was front and centre.

I’m writing a Creative Corner page about upcycled crafts in Magazine 2515. A new (unpaid) venture for me, to practise writing up what I usually do for community groups.

This month I made a bird feeder/ bee bath from upcycled lids and beads. (Editor’s note: Imogen will also be featured in an upcoming episode of the A to Z of Wollongong podcast, so keep your ears peeled!). 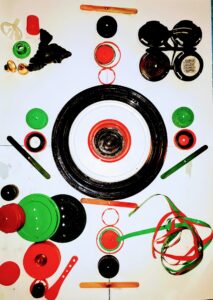 I’ve been turning a swing set into a shibari performance frame/photo studio area, which had its first trial recording yesterday 😃 and now that we’re allowed to go to people’s houses and stuff again, I’m really looking forward to getting some workshop/skill sharing things happening! 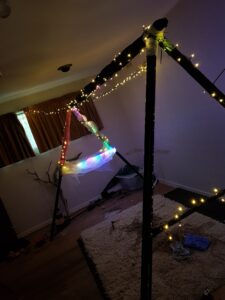 When it comes to freelance maker beauty, there’s none more stunning than jewellery and gorgeous cakes as you’re about to see.

I did a 2-day jewellery course. Pretty stoked. 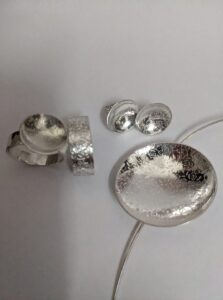 I made this cake for a friend’s elopement! Blueberry and lemon with lemon buttercream 🙂 Pic of the cake prior to the icing in the comments because I think it looks even yummier! 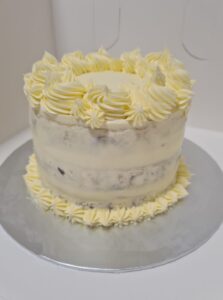 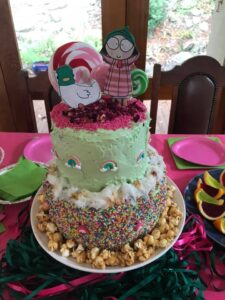 Making it for the kids

Many people who choose to be freelancers do so because of the inflexible workplaces that make it difficult to find the right balance. Luckily, our freelance maker crop features parents and dedicated aunts who know exactly how to use their creative powers to inspire the children in their life.

I made a piñata for my daughter’s party. 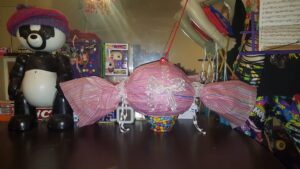 Formed an impromptu production company with my youngest daughter and made a test spot in the garage for our newest (and only) client.

I’ve been doing a Zoom workshop with teenage girls in NW Tassie on making animated gifs. We explored using iconic things from their region (cows featured prominently), along with Tulips, so that the gifs tie in with the upcoming Tunes in the Tulips event. I’m so proud of these young women and what they produced, and it’s great that people can use them on their Insta stories by searching #tunesinthetulips. You can see the rest of the gifs they made here: https://giphy.com/BighART

Dressing up the freelance maker

You can’t have a freelance maker feature without showing the wonderful work of our sewing enthusiasts and knitting and crochet buffs as this next collection shows. We’re great at the wearable gift giving, too!

My baby girl is wrapped in a muslin that I did the pattern design for. It is one of three designs I created for the children’s clothing brand – Nura Australia which was released last week. Just in time for my own 3-week-old baby to wear! 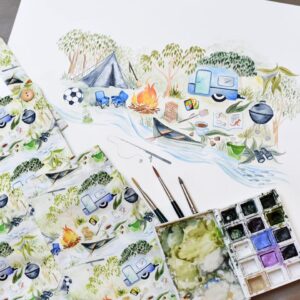 A few weeks (months?) ago a few people suggested I check out the Miniland dolls that are made in Spain. After much contemplation I decided on a red-haired boy, and I have fallen for him hard! These dolls are just adorable, with so many small details that give them a life like look.

Miniland dolls are sold either naked or in underwear only, depending on the style chosen. A few mums suggested I look into making clothing for them, as they are a bit hard to find apparently.

After working out the pattern and sizing over the last few weeks, making up lots of test garments and iterating until I was happy with the final version, this week I have released my very first dolls clothes for sale.

With a sleeveless fitted bodice with ankle length gathered skirt, this dress does up in back with hook and loop tape, making it easy for little hands to dress their doll. The robust fabric will stand up to hours of play.

I signed up to make a #literarycritter to accompany a new book coming out from Penguin Australia – “Animals Make Us Human”. I crocheted a Martin’s Toadlet for Dr Jen Martin’s essay on the toad, named after her father. 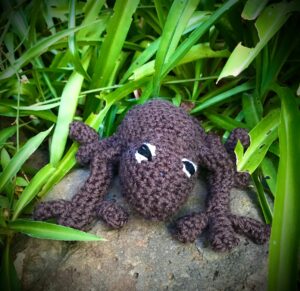 It was my cotton (second) wedding anniversary and I got a windcheater from Qualitops (they’re Ethical Clothing Australia accredited) and embroidered this art onto the back (with the permission from the Artist Liberal Jane Illustration) and I managed to keep the design secret while living in a two bedroom unit in inner Melbourne under lockdown by dramatically covering it every time my spouse walked past. 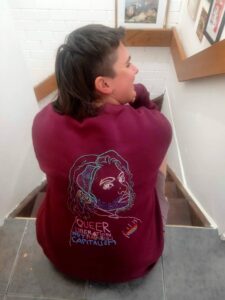 You have definitely got to see some of the freelance maker action in the home. Whether it’s the ever-popular gardening or gardening accessories, or the home renovations themselves, our freelancers are working hard to make every house a home.

I made this garden that now contains the ashes of my Nanna. This is its first bloom.

Have plans to replace the floppy marsupial fence with a low solar electric fence.

Garden is surrounded by a mesh fence supported by star pickets to ward off nibbling nocturnal pademelons. 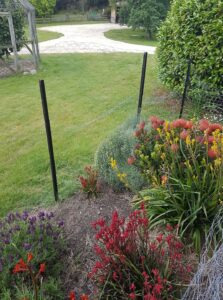 Loving painting these in my ‘free’ time. I’ve lost count how many ‘pot people’ and ‘pot heads’ but this little guy, inspired by Disney’s Coco has to be one of my favourites. 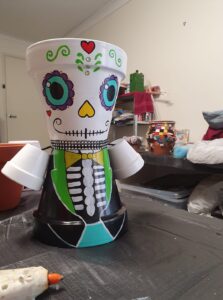 Took me all week, and it’s still not finished, but I’ve killed one dull beige door and window frame out of the 8 in the house and modernised it in sleek, sophisticated satin black. 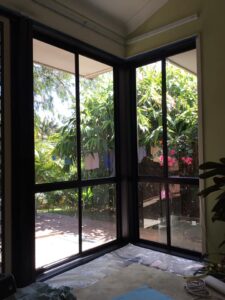 Want to find out more about who is doing what or how to be a freelance maker yourself? Join us in the Freelance Jungle.