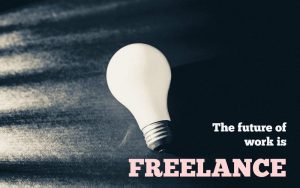 The Freelance Jungle now has its very own website and boy are we enjoying the new digs! One way to celebrate is our first participation in the creative, brave, always interesting and inspiring Vivid Ideas 2017 program.

We’ve decided not to take on a small topic either. We’re educating Sydney as to why the future of work is freelance. It’s a super exciting topic because it influences how we view work in Australia and the changing nature of opportunities available to us.

It’s such a big topic that it needs an all hands on deck approach. That’s why Rebekah from The Freelance Jungle is welcoming Monica Davidson from Creative Plus Business and Cameron Rambert from Freelance Australia to the stage for this special event.

As we move towards automation, information rich jobs and continue to question what we want from our working lives, we seek to investigate if ‘the future of work is freelance’ as part of Vivid Ideas 2017.

We’ll look at the myths and misconceptions within the industry. We’ll also looked at subjects that plague freelancers such as selling ourselves, self care and general business running. And we’ll even be exploring often overlooked opportunities for growth, funding and support here in Australia.

As part of the growth of the Freelance Jungle, there is a 1600+ strong closed Facebook group that is helping supply the questions we’re going to address.

The focus here is not on sales. It’s about providing support, sharing ideas and discussing notions. It’s the water-cooler and lunch room many of us miss. It’s for the people by the people, just the way a community should be.

Part of the event will also address the recently completed Freelance Jungle research for 2016/2017. 318 Australian freelancers from all around the country and living the digital nomad life overseas have responded. Those results will be available soon in digital format, but we invite you to come along and explore the findings.

Join the Freelance Jungle, Creative Plus Business and Freelance Australia as we unite to take freelancing to Sydney’s Vivid Ideas 2017 audience. We’re taking on the traditional work model and proudly proclaiming that the future of work is freelance on June 7th.

Join 100 other people at TAPP Gallery and have your voice heard as we craft the future of Australian freelance in June.

Your $29 (plus booking fee) ticket covers:

The early bird sale runs until April 18th. You can pick up that very same ticket for $20+ BF right now.

Run- get your ticket!

We’ll see you for the future of work is freelance on June 7th in Sydney.