What happened with that Illawarra networking event? 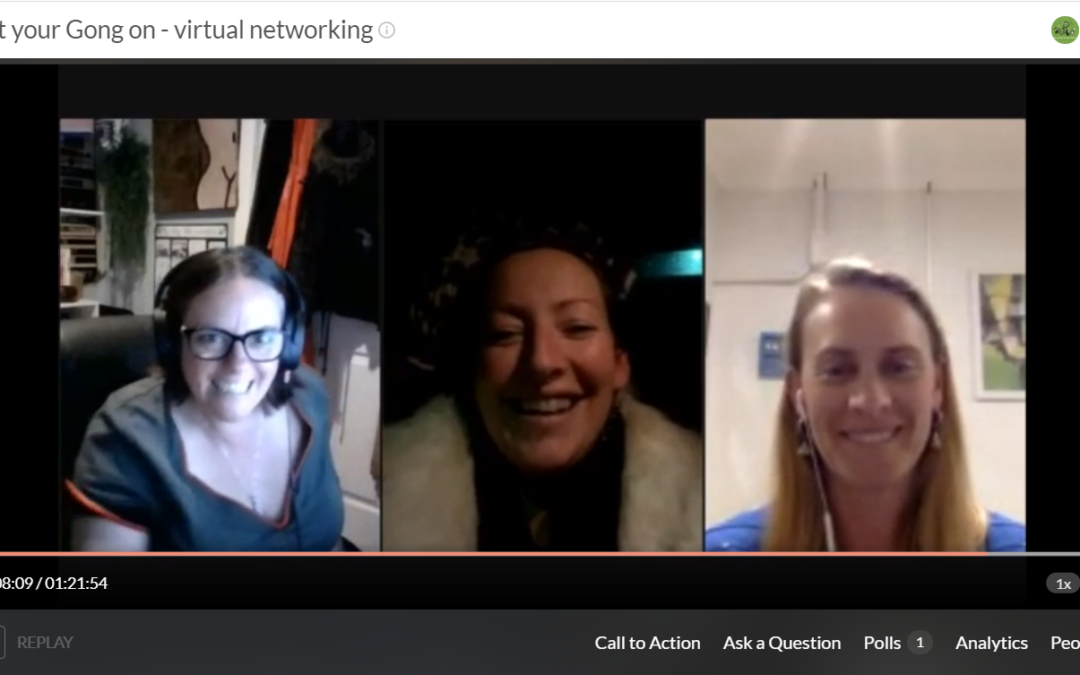 On July 23rd, 2020, a virtual Illawarra networking event called Get your Gong on happened on Crowdcast. This was about looking at the needs of local Wollongong businesses and matching them with suitable Illawarra freelancers. The idea was to act as a matchmaker to the two sides. Then, the two parties would work on a particular pain point together. The idea was made possible by a Quick Response Grant from Wollongong City Council.

It also included (much to the chagrin of some participants) meeting their newly acquired business match on screen.

Here’s what we learned from Illawarra networking event, Get your Gong on

Part promotion and a curated introduction, the idea of this kind of Illawarra networking event is relatively unique. Usually, you front up to a networking event and have to sell yourself. In the Get your Gong on format, a survey link was provided.

In writing the survey, I deliberately made sure I included the following:

An incredibly focused version of what people needed help with matched with what was on offer by the freelancers. Bluntly put, 20 odd years of research has taught me that everyone thinks they don’t fit in the checkbox. The reality however is we do on a research level.

What happens though in answering is we hate the reductive nature of the options available to us. I know freelancers and small business owners really connect with their work. They need to have questions crafted to reflect that connection yet easily match with other participants, so they aren’t clicking “other” when it’s minimal difference and simply a lack of opportunity to stress how special they are

A focus on genuine pain

South Coast summer bushfires and COVID-19 have been a strong feature of the latter part of 2019 and 2020. Pain point orientated language for the small businesses and pain relief orientated language for the freelancers. People love the idea of giving and getting help- but there are also pride issues with admitting you need a hand for small businesses and cultural cringes surrounding free work for freelancers to consider. How you frame it as such matters. It’s not free work so much as the ability to build a relationship on your own terms. It’s not aid for the ailing, more an opportunity to meet an equal and share the load

Setting and re-setting expectations (a lot)

The expectations had to be set early and reiterated often. This included ensuring people knew there was an expectation that they would participate in meeting people. That it would happen via a particular format at a certain date and time. It also meant ensuring that with every successful applicant to the program that they immediately knew that as an introduction for assistance, it would be capped.

Having done barter projects myself, I know people can get way to over-excited on both sides. This leads to scope creep and ultimately, an unsatisfying end result. It’s imperative everyone shares the same understanding of the baseline. This is managed by leveraging situations such as the $300 cut-off for declaration of bartered work given by the ATO. It’s also managed by giving examples of what that level of freelance work looks like. E.g. a couple of coaching sessions, a workshop, a one-page strategy plan, a headshot, or some kind of assessment such as SEO or branding etc. It’s about ensuring people meet on equal terms and enjoy what comes from that match.

You also have to blog about your idea and keep the social media flowing. I was a tad lax in both regards and should have known better. But, still, I managed to scrap through with the centralised We are the Gong Faceboook page as well as few blogs on the Get your Gong on project to introduce it and talk about it for both businesses and freelancers.

Normal networking events often leave participants to their own devices. This can make it tough for people to make genuine connections as it places ownership on people to sell themselves.

Despite being pretty damn good at what they do for a living, small businesses aren’t always naturally at home with marketing themselves. Similarly, most freelancers don’t want to come off as a blowhard or arrogant. And struggle to articulate their value because they are too close to the glass to see their worth from a client perspective.

Giving people a third person (e.g. MC me) to talk to make the process less pressurised for all concerned.

The Get your Gong on event will be back

Want to find out more about the Freelance Jungle events? Stay close to the Facebook page!