Recovering when another freelancer copies you 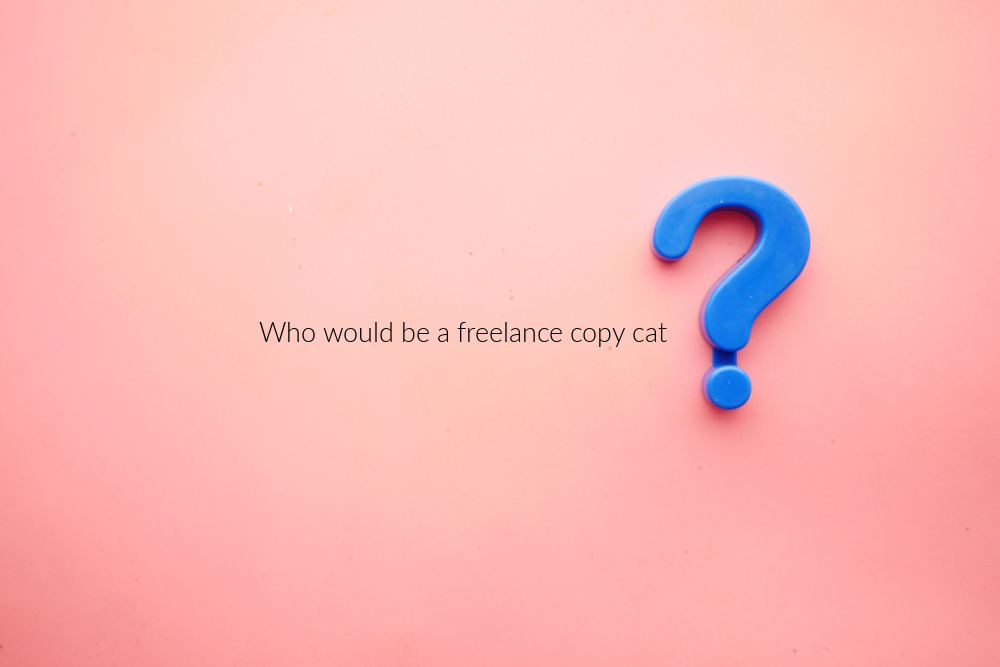 So, you’ve checked all the freelance copycat blog with the resources, and you still feel stung because another freelancer has copied you.

I get it. It’s bloody hard stuff to swallow.

Little freelancer, it’s perfectly fine to feel as though you’ve been tossed around in some weird emotional rollercoaster.

Recovering from the copying body blow

As I mentioned previously, there’s one place a copycat freelancer can’t touch you. And that is where you meet with the work you create.

Your verve, drive, personality and uniqueness are what makes you. 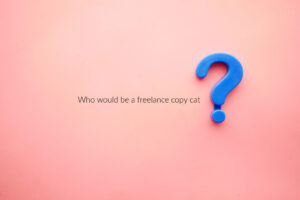 I could say some twee stuff about the flattery. Or how your stuff will stand up stronger. Or give you a spicy little revenge fantasy to cling to. Or misuse karma as some avenging angel.

But the truth is being copied sucks. It hurts for incredibly valid reasons.

You shared something when you were excited about it with someone you thought would understand the potential. Instead, you’ve found they crossed a line.

And (to be really honest) will probably remain completely and utterly oblivious to the upset they’ve caused. And/or bewildered by any contact or commentary that points out they’ve walked into murky waters and caused you hurt in the process.

People are less nefarious and more oblivious. They don’t usually knowingly go out of their way to rip creativity off because they want to do something to you personally.

They lack the ability to discern where their entitlement begins and ends. Or they’ve spent their life doing stuff for the sake of doing stuff with no real notion of creativity to the point where they don’t understand the difference between copying and creating.

Maybe they lack impulse control. Or they think “everybody does it”, and like bunnies running across the field in high volume, they believe as long as there’s enough people doing the same thing, it’s OK.

It’s a cluelessness we have within us that doesn’t recognise our actions can and do hurt other people. Especially when we only have our own goals in mind.

But you can still win against the copying sting.

Remind yourself of your soft and gooey qualities, those skills they can’t replicate, those elements they can’t get out of a box or a photocopier. Write them down. Admire them. Weave them in as you create. Because that’s the secret sauce.

And love that creative baby of yours anyway. Sure, someone stole the shine off their tap dance routine. But that doesn’t mean the baby is any less valuable.

Reflect on what you created

When a freelancer copies you, the temptation can be to walk away from the project. It can feel as though it’s contaminated somehow. Or that all the effort is useless because people won’t be able to tell the difference between your idea and theirs.

Or it might hurt to see them enjoying the success you believe should be yours.

It’s OK to throw your toys out of the pram. To take a few days on the couch and feel broken hearted. The trick however is not defining all your next moves with someone’s bad actions.

You thought that project or idea was worth it when you thought of it. You loved it enough to go through the creation process. And you got it ready for launch.

Take a moment to reflect on the gifts that project has already delivered:

Focus on going out to grab it instead of whether Ms Copy Clogs is going to come clippety-clopping past.

I feel sorry when a freelancer copies another freelancer’s ideas. Not only for the freelancer being copied. But for the one who robbed themselves of the fundamental joy of building something from scratch with their own two hands.

There’s seriously nothing like it. Nicking someone else’s idea and passing it off as your own is like putting your packet cake next to someone else’s artisan tower of joy. Even if the differences aren’t there for the eye, the copier knows.

No matter how much they try to love their baby, they’ll always know that all that sweat, creativity and effort was beyond them.

And when you think about it, customers and freelancers on the outside often know, too.

When you think about it, it’s like having a giant monument to your own originality casting shadows over your potential from here on in.

Plus, the freelancer who copies is also at a distinct disadvantage. They haven’t dug through and laboured to really get to know the content. They haven’t suffered through the art of learning, translating and creating in the same level of depth.

A freelancer who copies might have the Brodies notes of the story. They may even sell a lot of them. But they didn’t write it.

Often, that difference shows. That interpretation is on the surface. It lacks the depth and the roots needed to strike gold.

Besides, why let ‘em win twice?

You as the person has been the victim of a freelance copycat can’t allow the shitty actions of the freelancer who copies deter you from learning your own lessons. From your own creativity and drive. From reveling in your success.

Every single thing we do off our own bat as freelancers faces barriers.

Copying is one such barrier.

It’s painful because it’s avoidable and it’s really selfish on the surface. But it’s also outside of our control. And it also must suck to walk through life being a giant photocopier.

I mean, let’s face it. You will continue to have (way too many) freelance ideas.

Them? Not so much.

If you can’t control this person, if you can’t show them how oblivious they are, why let them live rent free in your idea garden?

What happens as a result of their launch or what they learn behaviourally will be different? Heck, they may not even know how to solve the problems you encounter.

Without it pulling your focus, all you can do is learn from the mistakes that gave them the opportunity to copy (if there were any). And move on. Move on with style.

You don’t have to give them anymore of your emotional, intellectual or physical petrol in the process.

Need a hand recovering from when a freelancer copies you? Check out our resources to help with a copycat incident. Or share your woes in the Freelance Jungle now.