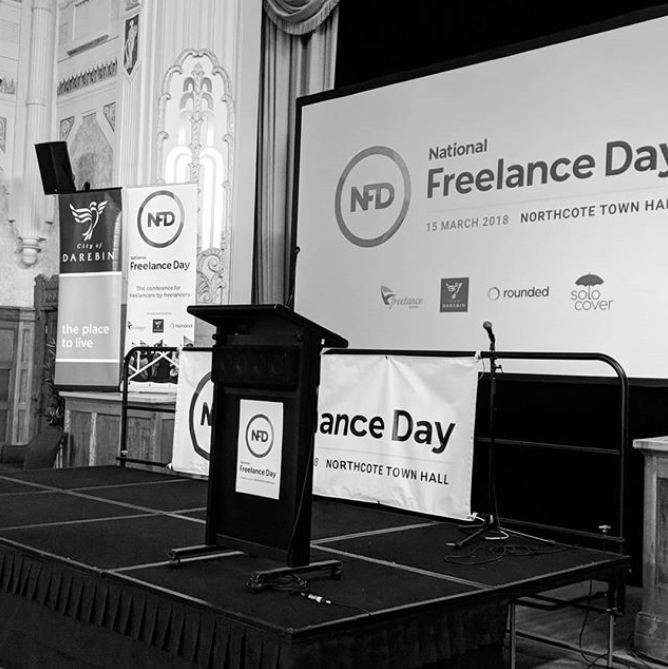 I recently flew down from Wollongong to Melbourne to speak at National Freelance Day, organised by Freelance Australia. I also took the opportunity to conduct a class on marketing in the end of life and death industry, death doulas.

Cramming that into 5 days wasn’t enough. I also wanted to see one of my best mates in his new habitat of Melbourne, teach a freelancer workshop and catch up with other business people over drinks and dinner.

As usual though, it wasn’t what I planned that struck me as the most interesting parts of National Freelance Day or even the Melbourne trip. Here’s what I learned 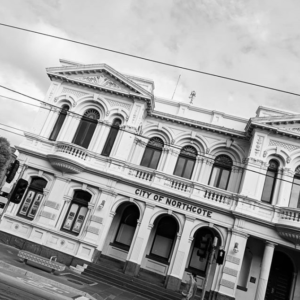 When I left my Windang cocoon at 5am-ish, my beloved dogs were too bleary eyed to care about what the crazy humans were doing.

My last trip to Melbourne had been a bloody disaster. I’d missed my flight from Sydney airport, paid through the nose to get down there and found myself without the chance to calm down and recover when I landed as I was met with a wall of unexpected social engagements. I woke up after a late night and high adrenalin with the worst flu I’d had in years. I’d had to cancel every workshop and spent the whole time feeling miserable in a hotel room.

This time, my trip to Melbourne was relatively a “need to know” trip with very loose plans outside work. While this might not seem like a popular idea, it was about looking after me.

I designed a plan at was purely self-centred. People wanted to meet, wanted to tag along, wanted to know my plans, wanted to organise whole days and all the rest. Each time, I would sit down and think “what’s in this for me?”

If it came up as a situation where I was feeling obliged to someone else with no benefit for me, I said no.

I felt less over-whelmed the entire time and was able to enjoy it more as a result.

This might not seem like anything special, but I felt like I fit my mask properly for the first time in a while. It reversed that Florence Nightingale sensation where I take too much responsibility for other people’s reactions and I just did what I needed. No matter the drama, I didn’t jump in to save things.

It was a sincere and wonderful relief to watch the world shimmy past without feeling crushed by obligation for a change. And it was wonderful to see Cameron Rambert for lunch and fortify that position through conversation, understanding and a great sense of feeling levelled by someone else that gets that sense of superhero tug.

Key takeaway: It’s tough being in service to people at times. But you’re only as good as the breathing space you give yourself and the self-care you apply.

Freelance teaching for one

Late last year, I launched a 3-day course based on what I thought freelancers needed the most. It covers reclaiming marketing so you don’t feel like a jerk, tiger taming difficult clients and disaster proofing your business.

The concepts are sound and much needed. What isn’t so sound is that sense of having to get all razzle-dazzle jazz hands to get bums on seats. It’s a weird place to be in when you don’t want to come off looking like a marketing jerk, but you need to market your course.

What happened? I got a couple of sign ups last year and I haven’t bothered to push it. One enrollment for the freelance course resulted.

My trip to Melbourne was paid for by death doula marketing and other avenues. Maybe I would have cancelled the class if they hadn’t been covered.  Or not. Who knows.

We worked out of my hotel room to keep costs low and it worked a treat. It was entirely about them and not about the curriculum I’d developed for a ‘class setting’.

I forgot that where I excel is those intimate moments where I can respond to students as they need it. Instead of driving myself nutty with curriculum and trying to be prepared, I asked my student to let me know what she really wanted to spend the day on.

Turns out, it was about creative writing and shifting away from high pressure marketing more than it was learning marketing itself. It was about having the tools to step away from high energy influences and be more grounded, in touch and ultimately satisfied with freelancing in the whole.

This was wonderful, refreshing and I got to spend the time with someone that was happy to learn and infinitely engaged.

The rub here of course is that running courses for one person is hardly a sustainable model. But it’s got me thinking about where the pain truly lies with freelancers versus the perpetual parade of courses us late stage freelancers tend to try and flog to them.

Key takeaway: Sometimes, the act of supporting someone in business is supplying knowledge. But a lot of the time, it’s about seeing the connections and abilities people already have and giving them the confidence to shine.

I’d been asked to speak by Cameron and the gang from Freelance Australia and was excited, nervous and happy all at once. It was comforting to know so many minkeys from the Freelance Jungle were attending. Pretty daunting too. I didn’t want to let them down.

Here’s the “seen it all” jaded side of me coming through. I used to do 2000-person conferences and singles events, so I know events. I’ve also freelanced for 8 years and worked since the mid-1990s in community and marketing. You settle in with the best of intentions but have a tiny bit of a voice saying, “I know this stuff.” 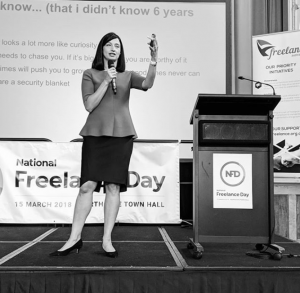 I watched Richenda Vermeulen talk about her journey from freelancer to agency servicing not for profits and businesses with purpose. It was a gentle meander through her life as a child of dual cultures and wanting to save the world through to finding her super powers. I adored the journey of vulnerability, kindness and admitting limitation. This is what I had been missing for so long; a woman on stage demonstrating a great business with clear traction that wasn’t coated in perfection, hubris or bullshit.

She wasn’t trying to say she’d scaled through pretence- she had the team to show for it. And the ethics. I tweeted like a true fan girl, but I adored this down to earth, delicate yet smart approach.

Layla Foord from Seek hit the stage. Yes, I expected a sales pitch. I braced myself. 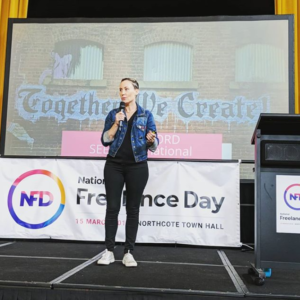 Instead, there was an English woman with braids, recovering from some seriously bad asthma, calmly explaining the need for varied people in teams and to keep the maverick from driving the bus in a product development environment. It was like coming back to my Lavalife roots, where I’d learned and delivered based on product management ideology.

Here was someone reminding me that despite everyone wanting to fail fast and shift product, there was still time to do it well by thinking it through. Here was another bright woman that let the product speak for itself.

She was in denim jacket, alluding to her inability to do small talk yet still lead teams to develop cool things. It was like coming home.

Then, I met someone I have admired and followed, messaged and been in awe of for such a long time in author, speaker and advocate in disability, Carly Findlay. Carly was just as charming, sparkly and interesting in person as she is in her countless blogs, posts and social media. Her energy is lovely. 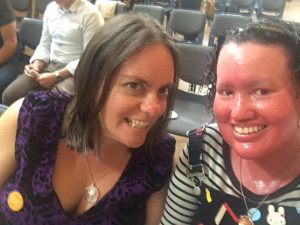 My only regret is that Carly and I didn’t have the chance to have a proper chinwag and a meal.

This was my third woman in a row that is vulnerable, caring and let’s her product speak for itself appearing on my radar in real time.

I was starting to see a theme here. Something that made me truly happy about my trip to Melbourne and being at National Freelance Day. Quiet was winning the day. Smart was walking through the door. There were no capes or capers. Just nice people.

The run continued with my fellow panellists, Andrew Jarvis from Circlesource, Kyri Theos and the man that was affectionately named Mr Darebin and didn’t seem to mind, Russell Lynch from Darebin City Council. We were different but aligned. It was like sitting with friends as opposed to in a business presentation setting.

My lightning talk blew past – I forgot to breathe as I had so much to say. It wasn’t only that I had the topic of community to talk on. It was that by this stage, my brain was light, happy and brimming with wonder. I’d re-written my speech 4 times in preparation and probably could have done without it and riffed it because the wheels were turning so much. I will be using those notes as blogs once I re-write them with a newfound vigour in mind.

It was great to share that moment with someone trying to solve the insurance issues of freelancers in Nick Beames from SoloCover.

I missed most of Jackie Mitchell’s branding talk as I had a business fire to put out, a friend to farewell and I went tromping through the streets of Northcote (unsuccessfully) trying to find Cameron a suitable present to say thank you for the wonderful day.

The drinks were made by meeting future coworking space owner Rob Materia that wanted to take my challenge to make a disability friendly space seriously.

It was further buoyed by handshakes and people jumping up to say they knew me from the Freelance Jungle. And uncovering vegan marketing and wooden watches in delightfully hipster surrounds of the Peacock in Northcote at the after-party drinks. Thank you to Emily, Daniel, Sean, Jen, James and a multitude of others for being so wonderful.

Key takeaway: Instead of people using the opportunity to pitch their brilliance, they were people. They explored mistakes, thanked their supporters, talked about vulnerability and nobody claimed to have all the answers. As a result, I felt instantly endeared to almost everyone I met.

Thank you to Cameron and Antonia for making National Freelance Day such a roaring success and a wonderful adventure. Your team excelled at customer service and the event was a positive adventure that I truly enjoyed.